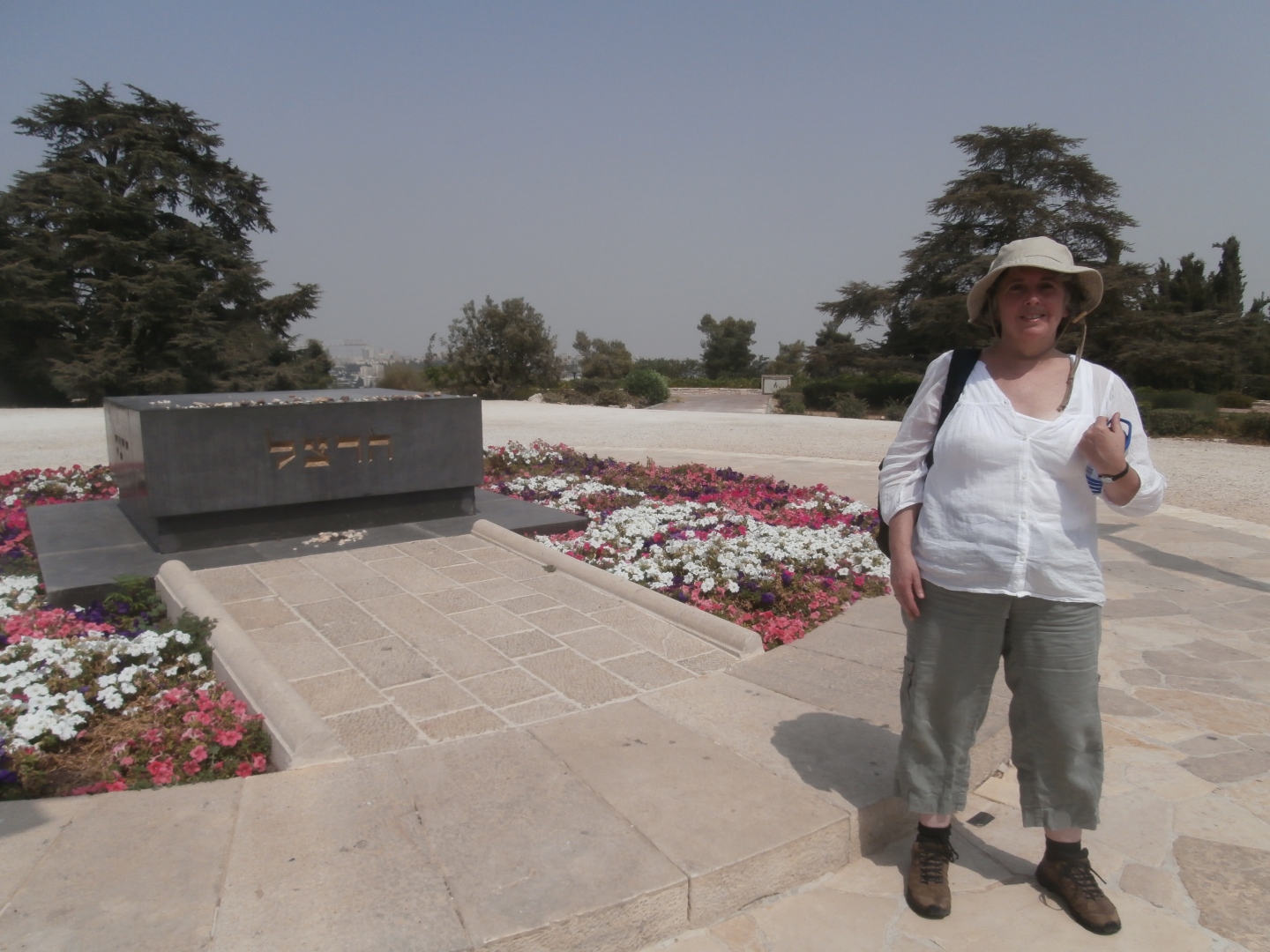 The Christian Peacemaking Team has a standard Palestine itinerary.  Delegates stay at the Palestinian-run Golden Gate Hostel close to Damascus Gate in the Muslim Quarter of Jerusalem’s Old City,  and our initial few days serve as a kind of orientation to perspectives on the conflict from a Palestinian Christian and an Israeli Jew.   We met with  Cedar Duaybis from the Sabeel Ecumenical Liberation Theology Center and with Arik Ascherman from Rabbis for Human Rights.   Both Cedar and Arik were faith-based in a way we wouldn’t see again in Israel or Palestine, grounding their actions in scripture, gentle and steadfast.

It was very very hot in Jerusalem when we arrived on Monday, August 3rd.  On Tuesday, an IDF soldier in Jerusalem  died of heat stroke.  As our hostel was in the Muslim quarter,women had to cover our legs and elbows, but I still felt giddy. Maybe it was my fellow delegates, a wonderful bunch about whom you will hear more later; they’re worth an entry of their own.   Maybe it was the Arabic coffee, or the fresh figs our cab driver Nasser gave us from his garden, or the way he treated us all to falafel at his uncle’s restaurant.  Maybe it was my own subversive joy at staying in a part of the Old City where I’d been warned Jews shouldn’t go.

Still, Wednesday’s itinerary included something I fought hard.   We were scheduled to take two tours back to back: Yad Vashem, and Lifta.   Yad Vashem is Jerusalem’s comprehensive, excellent Holocaust museum.  Lifta is the ruins of a village; its inhabitants fled during what Israeli call the War of Independence and Palestinians call the Nakba.

Much of my work as a writer has been about the relationship between the Holocaust and Israel, the truism that the Holocaust led to Israel, and the utterly offensive insistence that Israel is the Holocaust’s answer.  I grew up with this equation, and it’s one that Israel sponsors in countless ways.    Worse, when I saw the Yad Vashem would be followed immediately by a hike to Lifta, the message was clear.   We were going to be asked to see the Nakba as Israel’s answer to the Holocaust.   The parallel structure is irresistibly elegant.  Suffering breeds suffering.  The oppressed become oppressors.

Oy vey.   As I said, I fought this, but I had no luck.  Apparently, the Yad Vashem/Lifta tour is non-negotiable, and I suspected, with a sinking heart, that this was an attempt to give “both sides of the story” or, in a phrase I loathe even more, “dual narratives” as though there are only two views to consider, as though facts are subjective, and the only authentic truth is what each of us feels.   In case you haven’t noticed, I’m a fact person, or try to be.  I’m hungry for details.  I hate this stuff.

That night, wanting some time and space to think, I took what I thought would be a short walk before our eight o’clock debriefing and I found myself in the Old City’s Jewish quarter.  Full of Haredi families– far more than I’d seen when I was last in Israel– weirdly clean after the chaos of the other parts of the Old City, the Jewish Quarter feels deliberately calm and spacious.   Time was short.   I needed to get back to my hostel,  and I looked for the generally helpful signs to find my to the street leading to Damascus Gate.   That’s when I realized:  there were no signs leading out of the Jewish Quarter.  There were no directions to anything but other sites in the Jewish Quarter unless you count the the arrow directing you to the  the Dome of the Rock which, of course, was called the Temple Mount.  The Jewish Quarter is a place apart, a labyrinth, which leads back to itself and doesn’t acknowledge a Jerusalem that isn’t Jewish.

I won’t say more about how one man in a kippah finally asked if I was lost, or his distinct change of expression when I said I needed to find my way back to Damascus Gate, or my rush in the dark to a room full of worried-looking CPT-niks, but I feel the need to add this:  I found my Old City map provided by the Golden Gate hostel.   It clearly marked street names and religious sites for the Christian, Muslim and Armenian Quarters, but the Jewish streets were nameless.  Synagogues were absent.  The the only site marked in the Jewish Quarter was called by its pre-67 name, the “Wailing Wall”.

What do people choose to mark on maps?  Certainly, history proves that every nation-state erases and redefines borders, changes place-names, and marks the end of civilized territory with the equivalent of “Here there be Dragons”.   Israelis and Palestinians may be no worse than anyone else.  Still, is there such a thing as a good map here?  Earlier that day, I’d gone to the excellent Educational Bookshop in East Jerusalem in search of a close approximation.   The earnest, friendly Palestinian behind the counter told me that he had “political maps”, but only in Arabic.  He handed me a “touring map” that, at first glance, appeared to endorse a right-wing view of Israel, with no sign of Palestine, and areas marked Judea and Samaria.

Our Wednesday guide through Yad Vashem and Lifta was Tamar Avraham, a German immigrant to Israel whose studies in theology had led her to convert to Judaism.  She’s part of an Israeli organization called Zochrot.  The name is Hebrew for “Memory”, and they make a point of charting every village destroyed in 1948, reproducing street-grids of vanished Palestinian neighborhoods, finding ways, somehow, not to let anyone forget the world that vanished in 1948.    Germans are good at that; they’d better be.

I liked Tamar a lot and didn’t want to be hard on her, but was still predisposed to really hate this tour.   Yad Vashem is full of groups with headphones, each listening to a guide with a particular agenda, and Tamar as a German-Jewish anti-Zionist made of a point of using words like “forced transfer” and “ethnic cleansing” that might not have veered much from the content of the museum, but brought Palestinians to mind in ways that didn’t leave much room for argument.  That was the trouble.   Israel makes these parallels too easy.

Well, as it turned out, we never hiked down into the valley to see Lifta.   Tamara determined that it was too hot, and we’d never make it up again.  Instead, we saw Mount Herzl,  a cemetery for Israel’s founders and political and military leaders, located directly next to Yad Vashem.  Of course, the location was no coincidence.  We walked a gently sloped “connecting path” where each ridge was marked with a sign: they could be paraphrased as follows:  World War II ends, , and European Jews have nowhere to go; Zionists smuggle survivors into Palestine; the new state fights for its existence in its War of Independence.  A connecting path indeed.  Clearly, there are plenty of other people who wanted to tell us what to think.

Actually, Tamar suggested we visit Mount Herzl  because the summit provides an excellent view of Deir Yassin, a village that was leveled after forces from a right-wing Zionist militia massacred  inhabitants.   Deir Yassin is infamous, and word of the massacre caused many Palestinians to flee their homes and villages, and others were transferred by force, and by the end of what Israel calls the War of Independence, the map of the country was re-made.    Meron Benvenisti’s excellent book, Sacred Landscape, recounts the author’s travels with his father as he followed a mandate from Israel’s first president David Ben Gurion to go through the country and give all the Arab villages Hebrew names.

The next day, we’d leave for Bethlehem, where we’d watch a power point presentation from Lubnah Shomali of Badil, a resource center for Palestinian Residency and Refugee Rights; she told us that Palestinians were the largest and longest-standing displaced people in the world; 7.8 million total, including half a million who had left home for a neighboring village during the war, and were never allowed to return, the so-called “Present Absentees”  That same day, we’d visit the Lajee Center at Aida Refugee Camp.   Over its gate is a giant key, the symbol of Right of Return, a promise that one day the keys grandparents passed onto their children and grandchildren will open doors in Jaffa, Haifa, or doors of houses that have been leveled and reconstructed into Jewish homes.  Shatha Alazzeh, a beautiful girl with enormous, sad eyes, the camp’s Water Coordinator, said, “I am twenty-three years old and will never see the sea.”

But that was Thursday.  Wednesday afternoon, I was on Mount Herzl.   After we’d looked at Deir Yassin,  CPT delegates took a few minutes and wandered.  One of them noticed the Victims of Acts of Terror Memorial created in 1997; there was blank space on the wall, implying an assumption that names would be added.  I don’t think he saw what I only just discovered as I wrote this piece, that one name on that wall was that of a Palestinian boy from East Jerusalem killed in an arson attack by right-wingers in the summer of 2014.  Will the baby burnt to death by settlers this summer be added? Would his mother– if she manages to survive–  even want him and his father to be on a monument in Israel?

I wish I had time to linger, because on Mount Herzl, I’d come to a more immediate and intimate experience than Yad Vashem, a way to maybe understand the way Israel sees itself, where military service is required of Jewish citizens, and it’s likely that most Jews in Israel have direct experience of losing someone in a war or terror attack; these losses aren’t abstract.  Soldiers of every rank are buried side by side on the northern slope.   As we reach the summit, we find the grave of David Ben Gurion, the graves of lesser politicians and of course, Yitzhak Rabin’s grave which was covered with flowers and stones.   Placing a stone on a grave is a Jewish custom that pre-dates Zionism,, permanent evidence that someone visited.  When you actually get to Israel this begins to make sense.  There are a lot of stones here.

And there were a lot of stones on Theodor Herzl’s grave.   I’d read a good biography of Herzl by Amos Elon.  The founder of Political Zionism was a complicated man, a visionary who lost faith in European assimilation, and used every means available– including dealing with Anti Semites– to bring Jews closer to a national home.   He designed a flag: a white field with seven gold stars.    The language of this Jewish State would be German.  It would be welcomed by Arabs because the Jews would make them rich.  He had his road-map, this crazy Viennese dandy whose tomb looks out on Deir Yassin.

My own touring map from the Educational Bookshop would prove to be quite useful in the weeks to come.  In spite of my initial impressions, it did show areas of Palestinian and Israeli control.  It just didn’t show borders.  I could track where we were going, and consider distances and alternative routes.  I searched for Yatta, a big Palestinian city we drove through on our way to Hebron, only to find it marked with the faintest of dots.    I won’t say it was a perfect map but no one else in our delegation had one.   They did have smartphones, but a GPS can’t help much if you want to get to know new territory.