Thus far, I have five novels available for purchase.  The best place to buy them online is Powells, a brick and mortar bookstore in Portland, Oregon that has a fabulous website which includes out-of-print and used copies.

Or of course, you could support independent bookstores by ordering one there or though bookshop.org which gives a portion of their proceeds to bookstores across the country.

Please don’t purchase books– or anything else– from Amazon.  They’re destroying bookstores across the country, under-pricing their e-books and gobbling up everything in their path.   If you want to debate this issue with me, contact me directly.  I have plenty of opinions on this score.

I’m thrilled to announce the paperback release of my novel  Judenstaat from PM Press . You can find reviews of the earlier edition of Judenstaat here. 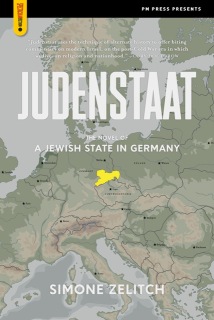 Judenstaat was carved out of Germany in 1948 as retribution for the Holocaust.  In 1988, A widow  pieces together a history of her country for 40th anniversary documentary and Judenstaat is changing from a Socialist republic to a Neoliberal center for banking and “free trade.” A wall protects the country German fascists. The year is 1988. That wall is about to fall

Owing a debt to Phillip K. Dick, and George Orwell, Judenstaat considers what how history gets rewritten to suit the needs of the present, and how we face the ghosts of the past.

Waveland came out from The Head and the Hand in May 2015.    They’re a wonderful press located in the Kensington  section of Philadelphia– my home town.  You can find out more about this novel here:  including a bit of a sample chapter.

Waveland is available through Powell’s.   Some Philadelphia independent bookstores, including Big Blue Marble, carry it was well.   You can also order it directly from the press, or its  distributor. 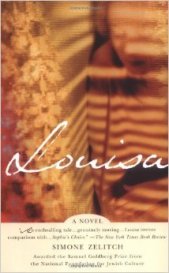 Louisa, published by Penguin-Putnam in 2001, tells the story of a cranky, chain-smoking Holocaust survivor who arrives in the new state of Israel in 1949, along with her German daughter-in-law who hid her through the war and refuses to leave her.   The novel received the Goldberg Prize in Jewish Fiction and got starred reviews in Kirkus, Library Journal and Publisher’s Weekly, as as well an awfully good review in The New York Times.  That review also contains a link to the first chapter. 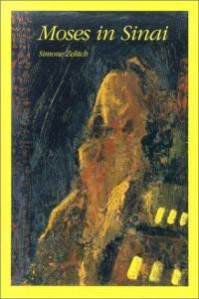 Moses in Sinai is a thorny  re-imagining of the story of the Exodus, influenced by magic realism, Midrash, and The Arabian Nights along with a dose of radical feminism.  The book was written long before Louisa, but came out two years later from Black Heron Press , thoroughly confusing some readers, and apparently delighting others.  I was proud to hear that the book is being taught at the University of Miami, in a class called ” Bad Jews.”  The centerpiece of the novel is the rebellion of Korah, who claims:  “All of the congregation are holy.”  I agree.   The novel was the subject of a scholarly piece by   Ranen Omer-Sherman.

The Confession of Jack Straw tells the story of the 1381 English Peasant Revolt  from a peasant’s perspective.  Jack Straw, apprentice to the notorious radical preacher John Ball, narrates to book.  It took me many years to get his voice right (I actually took two semesters of Anglo-Saxon in graduation school and lugged around the compact volumes of the Oxford English Dictionary) but the think I like best about my first novel is the structure, embedded folks talks like “The Miller and the Devil” and “Death Meets Three Sisters.”  I’ve always loved tales, and also stories about revolution betrayed.  My advice to a writer is always this:  write the kinds of books you want to read.  That’s what I did here and have been doing ever since.

Speaking of books I want to read, when I was 15 years old, I wrote to Ursula Le Guin, asking if she could recommend any good books about anarchism (I’d just read her wonderful novel The Dispossessed).  To my delight, she wrote me back, and I swore I’d never contact her again until I had a novel published.  When Jack Straw was about to appear, I let her know.  She read it, and responded with this blurb:

“In most novels about the Middle Ages, the deck is all face cards.  Jack Straw is rare and admirable in its uncompromising, unpatronizing identification with a peasant– an intelligent, vulnerable man caught up on the dream of equality that flared into the Peasant Revolt.  The novel lets the reader stand at the crossroads of politics and mysticism and see 1776, 1848, 1917, Tianenmen Square– the same dream, the same betrayal.  A very moving, honest book.”