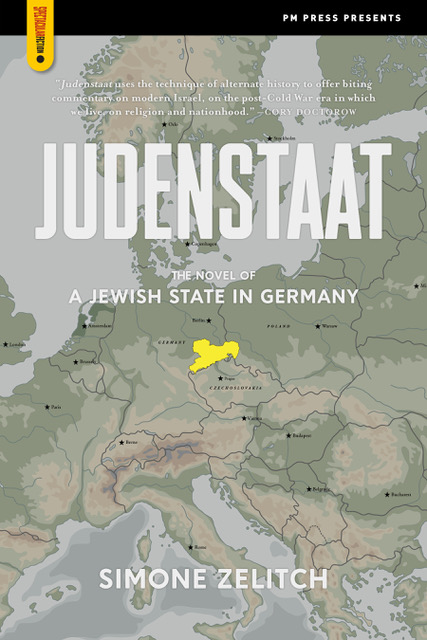 In 1948, a Jewish State was carved out of Germany as a direct act of retribution for the Holocaust.   In 1988,  archivist Judit Klemmer pieces together film footage to mark her country’s 40th anniversary, from its liberation by Soviet troops to its current role as a center for global capital, a “bridge between east and west.”

Judit is still mourning her husband, a German shot by a sniper years before.   His ghost haunted her her in that archive.   What doesn’t fit into the official story?   What will get left on the cutting room floor?

“Judenstaat uses the technique of alternate history to offer biting commentary on modern Israel, on the post–Cold War era in which we live, and on religion and nationhood.”
—Cory Doctorow, co-editor of Boing Boing and author of Little Brother

I’m thrilled that the paperback of Judenstaat will be published by PM press in 2020 and is now available for pre-order.   This edition includes a new introduction, end-notes that sort out what is real and what’s imaginary, and an author interview.